In the Highland Lakes of Central Texas 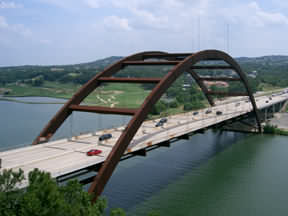 More commonly known as the "360 Bridge", it is officially named the Percy V. Pennybacker Jr. Bridge and is a through-arch bridge across Lake Austin which connects the northern and southern sections of the Loop 360 highway, also known as the "Capital of Texas Highway."

The bridge won first place in the 1984 Federal Highway Administration's Excellence in Highway Design competition. In 1992, the Austin members of the Consulting Engineers Council of Texas were surveyed and selected the bridge as the most innovative example of Austin architecture. The bridge is a good point for launching your boat. It is also a popular gathering point on the lake. 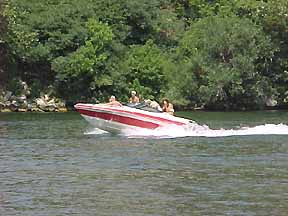 Lake Austin, a constant-level lake, is the sixth lake down in the chain of Highland Lakes on the Colorado River in central Texas. The lake starts at the Mansfield Dam and ends at the Tom Miller Dam in the city of Austin, both of which are hydro-electric power generating dams.

Lake Austin has high cliffs in places along the shore of the lake which provide shelter from the wind for the best in boating activities. The cliffs are dotted with expensive homes overlooking the lake. Fishing is also a popular activity on the lake, which has been stocked with largemouth bass, catfish and sunfish.


Services in the Area

Planning on bringing your pets to the Highland Lakes?

Warning about harmful Algae.
A harmful algae bloom occurs when cyanobacteria, also called blue-green algae, produce toxins that can harm people and pets if they drink the lake water